Here we go again. Another banking crisis at our feet. Yet another round of recrimination, blame, stupid ideas and finger pointing. And guess what? It is all about mortgages...again. Because the banks messed up...again.

First, let's simplify and identify the problem. It is actually pretty straight up this time. The banks, in their haste to foreclose on those mortgages they should not have issued, were sloppy about the paperwork. Yes, I know. A lot of people bought houses they could not afford and agreed to mortgages they could not pay. They share in the responsibility for this mess, too.

But not the foreclosure debacle we now have. This one rests squarely with the banks. They simply failed to review the documents as they filed thousands of foreclosures. This led to uncertainty about the titles of the homes and that has led to canceled sales and removal from the market. This is not rocket science. In a lot of cases, the documents that are flawed are affidavits of ownership or delinquency.

It is important to note that the banks themselves stopped the foreclosures. Not the government as some would like to say. In fact, except for some really stupid ideas, government is not all that involved yet, which is partially a problem and partially a blessing.

Several so-called leaders including the false queen Nancy have called for a nationwide freeze on all foreclosures. This is idiocy. Lots of the proceedings are just fine and have no problems. A freeze would actually make things worse since those people being foreclosed on for non-payment would get to live for free in homes they should not be in. And it would embolden even more people to stop paying. Nancy's little freeze idea is the result of election year panic and her need to sound like she is in charge of anything other than 435 severely incompetent congress critters.

This is a problem created by the banks and one that can only be resolved by the same banks. Many are claiming that this mess will further harm the economy. Probably not. See, these homes will be foreclosed on and become available. Nobody is forgiving mortgages. Nor should they. The banks need to learn to do their job properly. It is really that basic.

My question is where are the regulators? Again? I thought this lax regulatory issue was being dealt with. What happened to the promises of vigilance from Obama's pre-failed economic team? Where are all of the regulators now? Well?

Because that is the question here. The banks freely admit they messed up. That is not up for debate. The real problem is that once again, the Federal Reserve under the ever incompetent Bernanke and the Treasury under the always incapable Geithner have simply not done their jobs. They have once again looked the other way. Once again pretended it is not a real problem. Once again yielded to the corrupting forces.

In an interesting side note, the Senate quietly and without any fanfare at all passed a bill that would actually make it easier for the banks to not do the proper paperwork by allowing out of state notarization, thus making it almost impossible to verify the documents' legitimacy. Obama says he will not sign this and he should not. The banks need to learn to do their jobs, not keep asking government to relieve them of their responsibility. I am sure that this will become part of the whole silly political shouting match, too and be wildly misrepresented by both sides. My question is how did this pass the Senate while aid to Haitians still suffering from an earthquake and tropical storm did not. I guess bankers write bigger checks than homeless families.

Some on the right want to claim this is somehow Obama's fault. Well, except for the lack of any kind of regulation or oversight, it is not. They would like to somehow get us to believe this will cost the taxpayers and further hurt the economy. Not so much. All this does is reduce the inventory of homes for sale by less than a third. What ehey don't tell you is that 2/3 of foreclosures are procedurally okay.

Some on the left want to use this to again try their ludicrous and dangerous mortgage forgiveness scheme where those folks that bought homes they could not afford are suddenly free and clear of their mortgage. They want to use this to basically reward idiotic behavior by home buyers. It was a bad idea 2 years ago, a bad idea last year and a bad idea today.

What needs to happen is everyone should step back from this and let the banks sort it out. They made the mess through sloppy and lazy procedures. Let them fix it. In most cases, it involves actually reading the paperwork. Just like Congress doesn't and apparently like the banks don't.

This entire mess can be simply summed up. The banks messed up again and they want to make it our problem again. Well, I say no. They broke it, they can fix it. This time, they will have to just deal with it.

To those in government - on both sides - looking to make political points, I say shut up, shut up, shut up! Stop! Enough! These are home foreclosures we are talking about. Families and businesses. Not some abstract you can use in your sad election bid.

To the pundocracy, I say happily, who cares what you think? You are more part of the problem than any solution. Screaming about this as if it is the end of the world. Looking for the partisan angle. It isn't there. This is a simple paperwork snafu. Caused by laziness and arrogance at the banks. Yell at them. I dare you.

Maybe we need to vote on November 2 for anyone not an incumbent. No matter how wacky they seem, they have to be better than what we have now. Come November 2, let's foreclose on their political careers and take our house of government back from them. They certainly have not paid as promised. 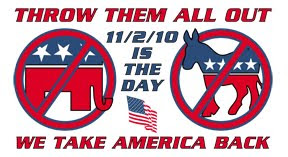 You can order them here: http://www.itisnotagame.spreadshirt.com
Posted by Keeva at 8:30 AM